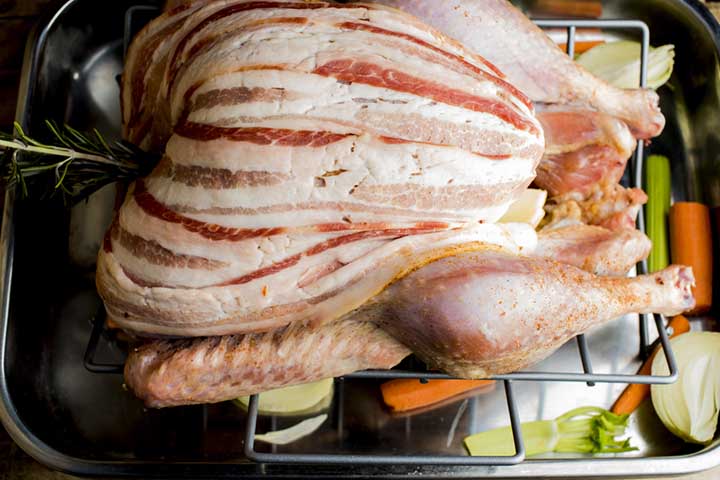 For those of us, bacon lovers looking to lead healthier lives, one of the most popular alternatives is turkey bacon, a long-standing option that many restaurants offer and most grocery stores carry.

But the question is, for most of us, is it really healthy, just “healthier,” or is it as bad as regular bacon? Where does it come from? What makes it healthier or not?

Where Does Turkey Bacon Come From?

There are two primary places turkey bacon comes from. One source is the thigh of the turkey. The second source is made up of a mixture of finely ground-up light and dark meat from all over the bird. Additionally, turkey bacon can come cured or uncured or smoked and usually comes in strips like you’d pork bacon or chopped up already.

What Animal Does Turkey Bacon Come From?

As the name of this tasty food implies, turkey bacon comes from turkeys.

Farm-raised turkeys are used for nearly all store brands available, with the occasional local farmer making their own and selling in a local market or at a farmer’s market.

What Part of the Turkey Does Turkey Bacon Come From?

Turkey bacon is typically made from either a mixture of dark and light meat from throughout the turkey or from the thigh meat (dark meat) of the turkey.

How is Turkey Bacon Made?

The meat is combined with seasonings, oil, and preservatives and then pressed together into a larger mass that can be sliced.

Some manufacturers will also add pork fat to improve the flavor of turkey bacon and add texture and moisture since turkey is naturally drier.

Some brands may also add liquid smoke or actually smoke the bacon for that oh, so delicious taste!

Turkey Bacon vs. Regular Bacon: Which is Better?

Whether you’re asking about health quality or flavor, texture, or calorie count, there’s a solid debate on turkey bacon versus other kinds of bacon.

For many, standard bacon (pork) is the only way to go. For some of us, though, the flavor of turkey bacon is better.

So, if you’re wondering about the taste, you’re really going to have to try it for yourself to decide.

Health factors are split between a few things, too, when it comes to pork versus turkey bacon.

Turkey bacon may use less salt than standard bacon.

Ultimately, most experts note that turkey bacon can be slightly healthier than standard pork bacon, but not by much.

So, if you’re going to eat one or the other, choose the one you prefer and make health adjustments elsewhere. It will be more realistic.

Much like the turkey versus pork bacon debate, there are several factors to consider for yourself.

Beef bacon is made from the beef belly and contains high amounts of fat, just like pork bacon does. This is why some prefer its flavor to turkey bacon, which has a leaner, drier texture and taste.

Ultimately, this one comes down to flavor and texture for you as well. If you like the thicker, heavier style of bacon, beef might be your preferred choice.

If lighter, thinner bacon is your goal, you may just want to stick to the turkey bacon.

There are many companies that make turkey bacon that’s available at standard grocery stores. Some specific stores (like Trader Joe’s) have their own brand that many love as well.

If you’ve got more questions about turkey bacon, hopefully, this FAQ will help

No, turkey bacon is not red meat. Turkey is considered white meat, and therefore the bacon is white meat as well.

The only exceptions will be if the turkey bacon is made with beef products mixed in.

Is turkey bacon made from pigs?

Turkey bacon is not made from pigs but rather made from turkeys.

Some brands may use pork fat or similar pork ingredients, however, to alter the flavor to taste more like standard pork bacon.

What is the healthiest brand of turkey bacon?

This brand is leaner, uses no nitrates to process the turkey bacon, has less sodium (though not significantly), and has a higher protein count than most brands.

Turkey bacon could not be considered healthy. It is healthier than either beef or pork bacon, but not by much.

Turkey bacon, on average, is 50 calories less per two slices than regular bacon and sometimes has lower sodium than pork bacon.