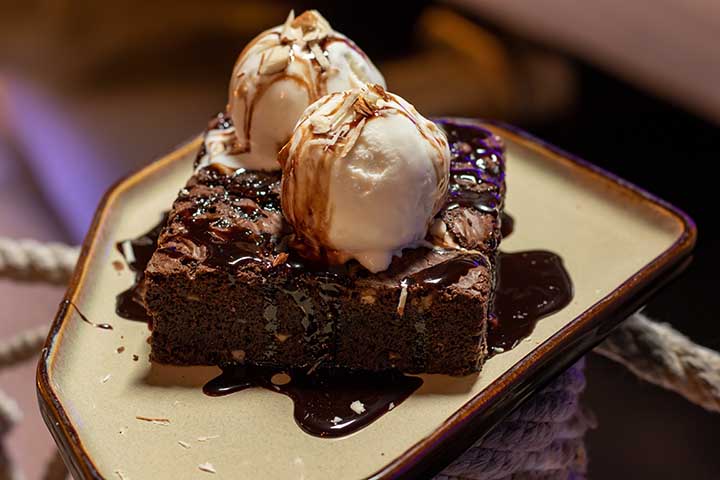 Brownies are amazing. So many flavors, so many mix-ins, so much chocolate! But what do you do if you don’t have a standard oven – or don’t want to use it – and you’re craving brownies?

Maybe that toaster oven that’s sitting on the counter. Would that work?

Can You Bake Brownies in a Toaster Oven?

In a simple word, yes. You can absolutely bake brownies in a toaster oven. So let the heavens rejoice as the summer heat wave rolls through. You can still have homemade brownies! But there are a few things to keep in mind as you bake.

Pros & Cons of Making Brownies in a Toaster Oven

Brownies. Rich, crumbly, chocolatey, sweet brownies! They’re a fantastic addition to any picnic, church potluck, family gathering, or, well, day. But what’s the best way to whip them up when you’re in a hurry to indulge?

There are both pros and cons to baking them up in a toaster oven.

Standard convection ovens aren’t an option if it’s summertime or you live with a heat-sensitive partner like I do.

They create way too much heat and jack up the energy bill if you try to combat it with the air conditioner.

A toaster oven only heats up the area immediately nearby, meaning you can still stand to be indoors with the brownies baking. Well, that is if you can stand the aroma and wait for them to finish baking!

You Can Make Small Batches of Brownies Even Easier

Toaster ovens are super handy if you’re trying to keep yourself from eating the whole pan of brownies on your own.

You can whip up the batter, stick most of it in the freezer and just bake a couple of brownies at a time in the toaster oven.

For this, I like to use silicone cupcake liners or even silicone ice cube trays for brownie bites.

And when you make small batches, they bake faster, too, so eat up!

On the other hand, if you’re making a whole batch of brownies, baking them in a toaster oven will take longer than a standard oven in many cases.

Conventional ovens are simply more powerful than a toaster oven, so they work faster. Unless you have the right toaster oven explicitly designed to combat this issue (i.e., convection toaster ovens).

How to Bake Brownies in a Toaster Oven?

Depending on the exact recipe you use, of course, the instruction will vary somewhat. But generally speaking, you can follow this guideline for baking brownies in your toaster oven.

Depending on the toaster oven, you’re likely to need some extra minutes, but be sure to only increase baking time by a few minutes.

And only after the prescribed time reveals the brownies aren’t fully cooked.

What Are Some Good Brownie Recipes to Try in My Toaster Oven?

Some of the best brownies are made from scratch, and some use boxed mixes with an upgrade!

Here are some of the tastiest brownie recipes you’ll find:

Is It Better to Bake Brownies in a Regular Toaster Oven or Convection Toaster Oven? What’s the Difference?

There isn’t a noticeable flavor difference between conventional oven-baked brownies and toaster oven baked. The difference is going to be what’s most convenient for you.

If you want to keep heat levels in the house down, go toaster oven. On the other hand, if you want to save time and your conventional oven is quicker, use it.

Personally, I love using a toaster oven because it just feels more convenient and generally is easier to make smaller batches in. But that’s me.

How Long to Bake Brownies in a Toaster Oven?

If your toaster oven is properly efficient, it typically takes 15 to 25 minutes to bake brownies in a toaster oven.

What Types of Brownies Work Best in a Toaster Oven?

Any brownie recipe with a fudgy texture, anything with peanut butter, marshmallow, or similar mix-ins are also going to do really well in a toaster oven.

You’ll get that sweet, gooey texture just about perfect, as long as you don’t overcook them.

If you like really firm brownies, you’ll probably want to go with a conventional oven.

Can I Make Boxed Brownies in a Toaster Oven?

Yes! You can make any brownie recipe in the toaster oven. Firmness results vary broadly upon time spent baking, of course, but that’s true of any recipe.

Do I Need to Do Anything Different for Toaster Oven Brownies?

The only thing you’ll need to consider doing differently in your toaster oven is potentially the baking time (depends on how efficient the toaster oven is) and the pan size. Everything else should remain the same, including how you line or grease the pan, ingredients, liquid volumes, etc. There’s very little difference between the two baking methods.