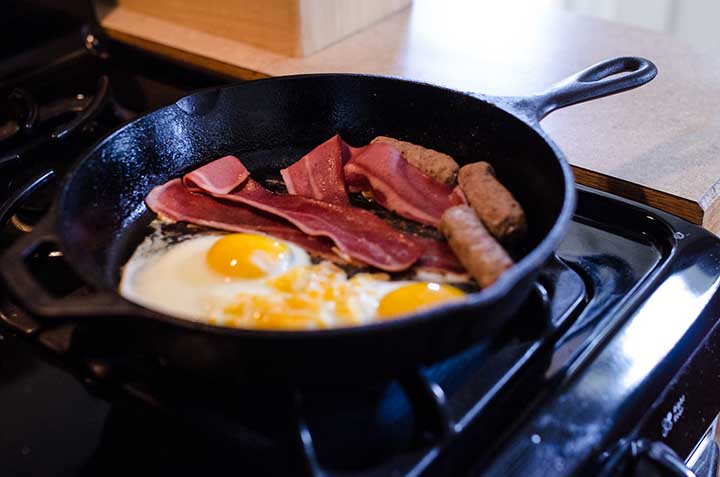 There’s nothing so delicious as a breakfast made with eggs, turkey bacon, pancakes, and fresh fruit.

But when you come to the fridge to whip up that amazing meal and you find the turkey bacon looks weird, can you cook it anyway, or will you have to run out for more?

Here are the best ways to tell if you’ve got good or bad turkey bacon on hand with just a few simple tricks.

How Do I Tell When Turkey Bacon Has Gone Bad?

Turkey bacon usually lasts a long time but if you notice discoloration, a funky smell, or greasiness in raw turkey bacon, steer clear, throw it out, and run out for more! Otherwise, you could wind up with some upset stomachs and a ruined meal.

What Signals Can Tell Me That Turkey Bacon Has Gone Bad?

There are several different ways you can tell that your turkey bacon has gone bad. These are the most common ones I’ve used to differentiate between good and bad.

Hands-down, guaranteed – if the turkey bacon has any discoloration, you don’t want to use it.

Something has invaded the bacon, whether it’s freezer damage, the meat itself spoiling, some contamination from other foods, or anything else that you don’t want to consume.

And though you might be tempted to cut off the bad parts and cook the rest, trust me – you don’t want to do it! Tummy aches will follow, and a distaste for turkey bacon that you might not recover from!

If your turkey bacon smells a little wonky, it’s either on edge or already past the edge.

I wouldn’t recommend cooking any kind of animal product, in particular, if it smells even slightly off. You could get pretty sick from it – and nobody wants that!

If your turkey bacon is slimy or greasy, it’s gone bad. No ifs, ands, or buts about it. Throw it out!

The Sell By Date Has Passed

The actual least reliable way to tell if turkey bacon has gone bad is actually the sell-by date.

Companies follow specific guidelines for this that aren’t always so accurate due to different processing of the meat, sanitation levels of preparation spaces, and many other variables we could never account for fully.

Plus, if you bought the turkey bacon at the beginning of your shopping trip and it’s a while before you get it into the fridge, the date could be affected, thanks to the heat in the car.

Additionally, your own preparations of the meat can affect how long it is good for (think dirty blades or countertops, for example).

Yes, absolutely it can! Any food product, even non-perishables, can go bad. And a meat product is even more likely than many others to go bad.

Cooking the turkey bacon will extend the life of the meat a little while longer, but only by a couple of days.

What Happens if You Eat Bad Turkey Bacon?

Depending on why the turkey bacon went bad, there could be a few different outcomes – none of which are pleasant.

You can get an upset stomach, diarrhea, bloating and gas, or worse, full-blown food poisoning.

How Long Does Turkey Bacon Last?

Turkey bacon, when handled and refrigerated properly, can last a pretty decent while.

In the fridge, for example, when unopened, a package of turkey bacon that’s brought home long before the sell-by date can last three to five days and keep its flavor, freshness, and texture.

After that, turkey bacon will start to deteriorate and approach the end of its shelf life.

In the freezer, turkey bacon can last a super long time without losing flavor and texture. Wrap it properly to keep out freezer burn, and your turkey bacon is good to go for four to six months.

After the meat is cooked, cured turkey bacon is good for up to two weeks in the fridge. Uncured is good for more like three to five days.

Ideally, after you cook turkey bacon, store it in the freezer if you won’t be eating it the same day. It will last longer and taste better, and is easily reheated.

How to Properly Store Turkey Bacon?

For cooked turkey bacon, simply wrap it up tight with foil and place it in an air-tight container.

Then, either place the container in the fridge if you’ll be eating it in the next few days or put it in the freezer if it will be a while.

For uncooked turkey bacon, keep it wrapped tightly in the original packaging, avoiding opening it for best results.

If you need to open the package and take a few strips, package the rest tightly in foil and place it in an air-tight container, then return it to the fridge if you’ll cook it in the next couple of days.

If you’re not going to cook it within about 48 hours, put that foil-wrapped package in the freezer in an air-tight container.

If you’re still curious about more turkey bacon facts, check out these helpful questions and answers.

Is it okay to eat turkey bacon after the expiration date?

It depends. If the bacon just expired and shows none of the signs of going bad (i.e., no weird smells, no discoloration, and no greasy or slimy textures), you’re probably okay to cook it thoroughly and eat it.

If, however, it shows any signs of going bad, throw it out!

Or, if it’s been several days since the expiration date, it’s best to not risk it and just chuck it.

Yes! If your turkey bacon has gotten slimy, it’s sure to have gone bad and will cause some stomachaches if you eat it!

Bad turkey bacon tastes like rotting meat. The smell permeates the flavor, and you’ll likely gag and spit it out automatically (unless your sense of smell is damaged or hindered for whatever reason).

Having once eaten some bad turkey bacon, I highly recommend avoiding it!

Is all turkey bacon precooked?

No! Many brands choose raw turkey bacon as their product instead of precooked. Always check the labeling to understand how to best prepare it to avoid becoming ill from under cooked meat.

Can I eat turkey bacon uncooked?

Absolutely not. Turkey is made of poultry which can carry salmonella, amoebas, and other dangerous elements that need to be dealt with, usually by fully, properly cooking it.

Can I refreeze thawed turkey bacon?

Once you’ve thawed out your bacon, don’t refreeze it.

Refreezing it will cause freezer burn and that can make you feel ill. (i.e., it’s another way turkey bacon goes bad.)