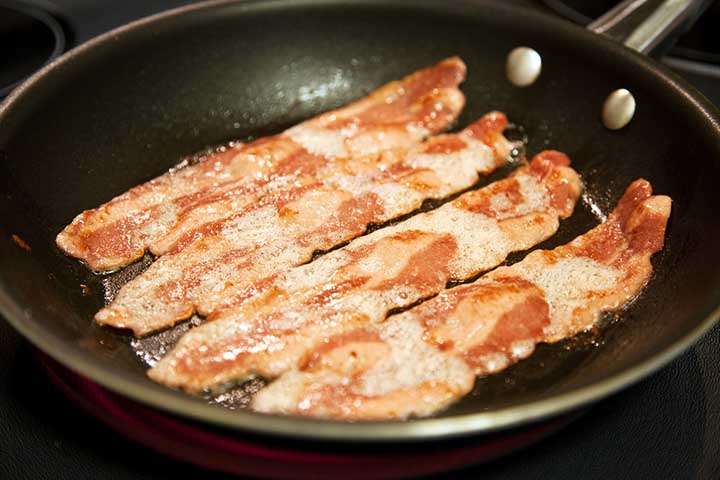 Bacon – that yummy, scrumptious breakfast meat so many people love to serve with eggs, biscuits, pancakes, or, well, anything!

But if you’re cooking alone and making several dishes, you need to keep that bacon warm, so it’s as crisp and tasty as when it first comes out. But how?

How Do You Keep Bacon Warm After It’s Cooked?

There are a couple of things you can do to help keep bacon warm after it’s cooked. Place the bacon in a pan and cover it with aluminum foil. If you need to keep bacon warmer for longer, you can put that covered pan into the oven set at about 100 degrees. This works as a warmer. You can also use a good warming pan.

When Do We Consider Keeping Bacon Warming?

One of the main times I keep bacon warming is when I’m serving up a buffet around the holidays.

But there are plenty of other times when you might want to consider keeping that bacon warm and fresh.

If you’re serving up a brunch and folks are coming and going during the service time, or you’re going for a buffet, you’ll want to keep that bacon warming, so it’s safer and tastier to eat.

As I mentioned, buffets during holiday spreads are a time when you want to keep bacon (or bacon-wrapped goodies) warming.

If you’re cooking the bacon ahead to make service easier at the time, you’ll want to re-warm your bacon.

This means taking it out of the fridge after it’s been cooked and popping it into the oven at a low temp and then either keeping it there or placing it into a warming pan, depending on your needs.

If you’re attending an event when potluck meals are served, you’ll want to keep that bacon warming in a pan of some kind.

There are several effective ways of keeping bacon warm after it’s been cooked.

After you cook up the bacon, you can put it into your slow cooker and set the mode to “warming” or “low,” depending on the options available.

I’d recommend keeping the bacon in a pan that fits inside instead of just dumping it into the cooker as is unless you’re planning to serve it out of the cooker.

It’s the perfect way to keep the meat at the right temperature without burning it.

If you’ve got one available, a warming pan is an even better option, at least if you’re serving a buffet or similar.

A warming pan is the type of thing you see caterers use for buffet service. The pan rests over some kind of heat source (mine use tea lights, votives, or Sterno), and this heat source keeps the food warm.

If you don’t need to keep the bacon warm during service, you can pop a foil-covered pan into the oven to warm it up before serving.

The oven should be set to about 100 degrees Fahrenheit and should be allowed to preheat before you pop the bacon in.

Covering the Skillet on Low Heat

If you’d prefer to go stovetop, grab a skillet and place the bacon inside and cover it with the lid or some foil. Ideally, use a cast iron skillet for this. The flavor is phenomenal!

This will be the greasiest method of reheating just so you know, so keep that in mind if you’re not a huge fan of bacon grease!

Or, if you just need to keep the bacon warm for a few minutes after cooking before you serve, pop that bacon into a pan you can cover, grab some foil, and voila!

The bacon will stay tender, fresh, and warm this way, as long as you don’t wait too long! (I’d say about 15 minutes, and it will start cooling off.)

Finally, if nothing else will work, you can always pop pre-cooked bacon into the microwave.

Heat the bacon up in 20-second increments for up to 2 minutes to avoid overcooking the bacon and making a mess in the microwave.

Warming bacon helps to keep the crispy bacon tender and crispy instead of hard and crunchy, which comes from burning bacon.

If your bacon is cold (i.e., refrigerated after cooking), this warming method is your best bet for softening it up and releasing some of the grease for a better texture and flavor.

Can You Cook Bacon Ahead of Time and Reheat?

Absolutely! I cook bacon ahead of time and reheat it all the time, especially around Christmas and other holidays when I plan to make a variety of foods that need cooked bacon for their preparations.